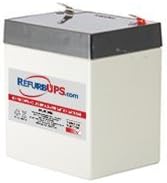 To Determine Your UPS or Other Equipment Model Number:

Locate your device's white serial sticker."br"Note: Serial sticker placement varies and can be located on the front, back, side or bottom of your Equipment.